Welcome back to another week of Fantasy waiver wire where you will find out which players at each position should be added based on their performance. 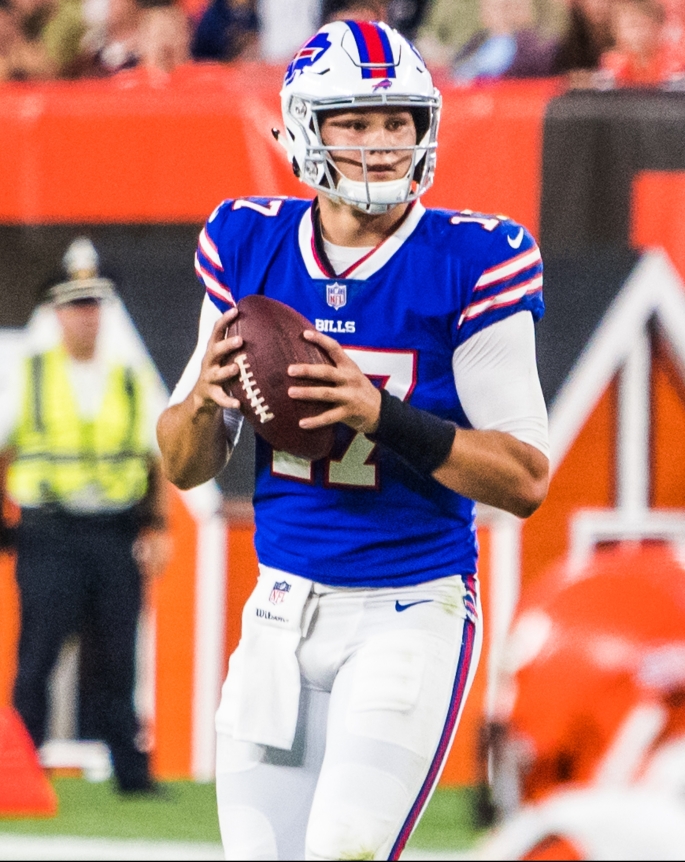 “Josh Allen” by Erik Drost is licensed under CC BY 2.0

I hope you had a good week in Fantasy. Or maybe it was bad because you started QB’s Drew Brees and Ben Roethlisberger and got little to no points from them.

Yeah, their performance weren’t what we expected going into the week. But they got serious injuries and we could be looking for replacements.

There were a few receivers that might have hurt your team too like the ones from the Philadelphia Eagles. So we will have a lot of questions to answer now. How do the injuries affect our fantasy teams? Who is available to add as replacements? Let’s find out!

As we look at the available players in the waiver wire, at least one person will be looking for a replacement. Did you have to suffer the loss of Brees or Roethlisberger? Or maybe you have to deal with the struggles of your current QB’s like Cam Newton, Baker Mayfield, or Mitch Trubisky.

Guys like Allen and Stafford have started their season off strong and we do expect to see them continue this start. I like Allen as I said last week. I think he has the pieces around him to help him succeed this season. If the Bills can get a more consistent run gam going Allen will be able to give us more with his arm.

Stafford has found himself after a rocky season last year. He has all his key players back healthy and more additions to the team he needs to keep bringing along. Stafford looks more and more comfortable every week, so add him as a QB replacement if you need him.

I’m still not to convinced that Garoppolo is back to what we think he could be, but if there’s any time to grab and stash it would be now. The Niners offense will have the ball a lot of times if their defense plays the way it was been over the past few weeks. If that happens, Garoppolo can become a top option at QB for the rest of the season. But let’s stash him in the bench for now.

Despite starting the season 0-2 without their No. 1 WR, Andy Dalton an the Bengals offense has managed to find ways to compete in their games, it’s the defense that needs help. With Dalton healthy, he’s able to find WRs Tyler Boyd and John Ross. The Bengals are still trying to figure out how to get their running game open, and when they do we could expect the field to open more for Dalton. This will be a week by week selection though.

Rudolph came in as a replacement for the Steelers and he found an instant connection with TE Vance McDonald as the two connected for two TDs in their loss. Rudolph will be the starter for the Steelers for the rest of season and with that we have several more additions to be grabbed on off the waivers.

Houston is still trying to get their running game going and Carlos Hyde has played a big role. I wouldn’t add him as a starter just yet, but we should consider adding him and waiting for a big out game that we know he is more than capable of having. If you had to choose between Hyde and Duke Johnson, my choice would be Hyde because he has seen more attempts and it should continue to grow.

Bernard was added by a lot of us last week in light of Mixon’s injury. Mixon played, but neither one of them really did much against the Niners surprisingly tough defense. I do think that both backs will be featured a lot throughout the season and in passing downs.

Speaking of the Niners, they have a number of RBs on their team and they like to use them all. We saw it this past weekend as Matt Brieda, Raheem Mostert, and Jeff Wilson Jr. all had great games for the Niners. I expect to see Brieda and Mostert continue their strong performances throughout. And as long as Tevin Coleman is out of action, Mostert should be a valuable pick up in fantasy.

After a rough week one for the Packers backs, they turned the corner and show us what the future weeks look like. That’s where both Aaron Jones and Jamaal Williams come in at. And I honestly think that both of the RBs will be featured throughout the season to help QB Aaron Rodgers and the WRs. Expect to see more from Williams in both the running game and passing.

Samuels is a just-in-case add because you want to make sure that you have the handcuff of James Conner if he is not able to suit up on Sunday. I still like Samuels in a PPR league because of the situation that the Steelers are in with Rudolph at QB. The whole Steelers offense will probably look different with Rudolph being the QB, but I think it might be a better move for them.

Speaking of the Steelers offense, the biggest player talked about is James Washington as he could likely be the top WR in their offense. No I haven’t forgotten about JuJu Smith-Schuster, but Rudolph’s guy is going to be Washington. They played together in college at Oklahoma State, so the chemistry is already there and we should see a lot from Washington this season.

The Bills offense has been looking good so far, and John Brown is a big reason why. QB Josh Allen has weapons to throw too and the Bills look to be a good team and compete for a playoff spot or maybe even a division title…

McLaurin is a knight in shining armor for the Redskins. He has came out of no way this season and I can see him continue to be a big part of the Redskins offense as he continues to gain trust from QB Case Keenum. With the Redskins running ability limited with the injuries, McLaurin will get more opportunities in the passing plays as a potential No. 1 receiver.

Is it Robinson and Hardman that you really want? This is tricky because of the way the Chiefs play. I wouldn’t try to get both, but one is a good pick up and that’s probably only until Tyreek Hill returns. If you really need them then go for it, but I would wait to see which one is more consistent.

Agholor is the top choice on the Eagles offense to pick up because of the unknown status of WRs Desean Jackson and Alshon Jeffery. If one or both of those guys are out this week, Agholor will get more targets and he could be valuable in team owners of Jackson and Jeffery.

Olsen turned back the time in his Thursday Night performance, but it’s still not what we want to see. As NFL fans or Carolina Panthers fans, we want to see touchdowns from Olsen and QB Cam Newton. I think that loss to the division rival, Tampa Bay Buccaneers, is an eye opener and they will hopefully turn their season around together.

Ebron found his way into the end zone for his first touchdown of the season and we do expect him to continue to be an option in the red zone for the Colts so add him to your roster before he’s no longer available.

Witten has found himself in the end zone twice in the last two weeks. He’s easily a touchdown guy for the Cowboys and if that’s all he gives you, that’s fine because we will see him in the end zone a lot this season. With the injury to WR Michael Gallup, Witten’s value goes up weekly.

Eifert struggled in both weeks, but he found his way into the end zone last week and we hope this is a sign of things to come for Eifert as he continues to get back into form and become the dominant TE he once was before all the injuries.

Dissly started off last season strong for fantasy owners until he got injured and missed the rest of season. He, like Eifert, is looking to continue to get back into form and be a big role in the Seahawks offense because we know how much QB Russell Wilson loves using the TEs in the red zone.

I hope you pick up the right players to help you win in week three if you fell short last week and make sure to get the QB replacement.